Coupang is unrivaled No. 1 shopping mall, used by nearly half of Koreans

Coupang is unrivaled No. 1 shopping mall, used by nearly half of Koreans 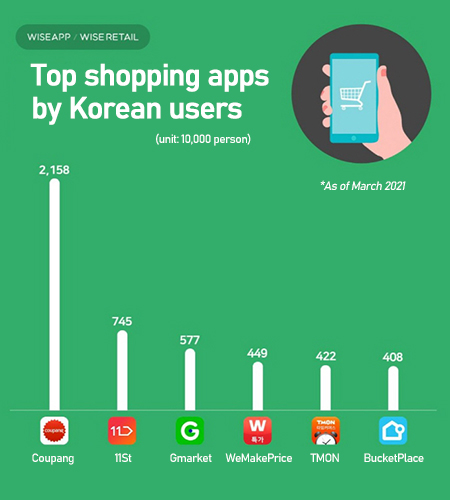 Nearly half of the South Korean population use Coupang for online shopping, with users registered at 21.58 million in the country of a population of 51.8 million. According to local app and retail trackers WiseApp and WiseRetail on Tuesday, Coupang was by far the most widely used shopping platform for Koreans in March, followed by 11st with 7.45 million users, Gmarket 5.77 million, WeMakePrice 4.49 million, TMON 4.22 million and BucketPlace 4.08 million. In March, Koreans processed the Coupang app 8 billion times. Coupang heads the ranking for all age groups. Coupang is the No.1 shopping app followed by A-bly, Zigzag, 11st and Musinsa. In 20s group, Coupang was trailed by Zigzag, Musinsa, A-bly, Idus and 11st. Most of the top-ranking shopping platforms for the young consumers are fashion and lifestyle shopping apps except for Coupang and 11st.